Engineering our own destruction: Spider-Goats

I promise you that this is totally for realz: we have genetically engineered a cross between spiders and goats. The reasoning behind this abomination is sound, and if you step back and just think about how cool it is that we’ve actually accomplished it, it’s kinda neat. But, I mean, c’mon: have these people learned nothing from SciFi Original Movies? 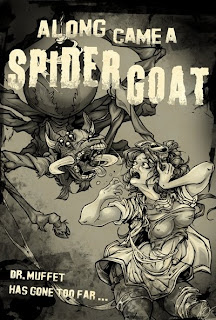 This is pretty much exactly what will happen. (Image found here.)

Scientists have told us for years that spider silk is stronger than steel, but we can’t reproduce it in a lab, and spiders are so small that it’s next to impossible to harvest enough to actually do anything with. So, in lieu of tossing up their hands in frustration and going back to modifying corn or whatever, they started thinking outside the box and shot some spider DNA into some goat fetuses.

Outside the box is EXACTLY what that is.

The product is a goat. It apparently looks, acts, smells, and produces milk like a goat. To paraphrase the Turing Test, when you can no longer tell the difference between something real and something artificial, it stops being artificial. The only real difference is in the milk: there are strands of spider silk in the milk. Not a lot, but more than if we were harvesting it from spiders, and definitely more than we’ve been able to produce without the goats.

This silk is, for all intents and purposes, spider silk. It’s stronger than steel. They get more of it every time they milk the goats. It can be used for bridges, body armor, and, most surprisingly, in the human body to repair or replace damaged ligaments and other injuries. So far, what these scientists have done (they’re Canadian, I think) is figure out a way to create a miracle material in a way that doesn’t hurt anyone or anything and is easy to gather.

The spinneret gene of a spider has been artificially introduced into these goats. And it passes on through breeding, so they’ve got a herd of maybe 50 silk-producing goats by the last published count. 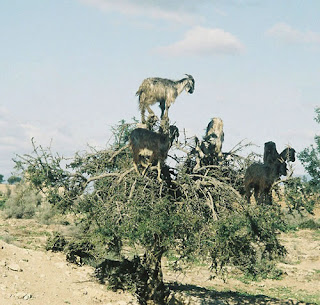 Juuuust waiting for the other shoe.
This is… it’s like a movie. A bad one. Like, not even a good scary movie, like The Birds or Psycho, but a bad one, like Blood Monkey or Shark Swarm. Well meaning scientists find a way to help humanity by doing something that seems innocent. “What can go wrong?” they’ll say, “It’s just a herd of goats, who’s it hurting?”

TRY ALL OF HUMANITY, YOU MADMEN! 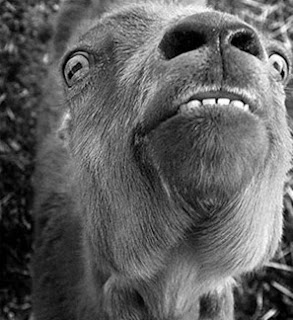 I’ll tell you exactly how this is going to go wrong: they’re expecting to expand the herd to over 1,000 goats. That’s a lot to keep track of. As the goats reproduce, each generation is going to start acting less and less like regular goats. It will be gradual. But slowly, like the patient hunters and cold-blooded killers they’ve been harvested from, the spider genes are going to start to become dominant.

They’re going to overtake the goat genes, replacing the happy, friendly bits of their brains with horribly spidery bits. But they’re going to keep the parts that are beneficial to them: the breathing and circulatory system, the eyesight, the hearing. They’ll probably start to develop more than four legs, and show the ability to utilize their webs in ways far more dastardly than just being able to be fished out of milk.

Do you know why spiders aren’t the size of cats, or dogs, or people, or cows? Because their breathing apparatus is ill-suited for anything bigger than, say, a baseball. We’ve given them, ON PURPOSE, better breathing apparatus. They’ll start to get bigger. And deadlier. And one of that 1,000 is going to escape. Probably a pregnant female who isn’t cool with laying her clutch of eggs, all 300 of them, inside the facility they’re being kept in.

She’ll get out. She’ll lay her eggs. And then the end of humanity will begin. They’ll probably cross-breed with some of the hardier wild goat species out there, like big horn sheep, and take over the mountains. 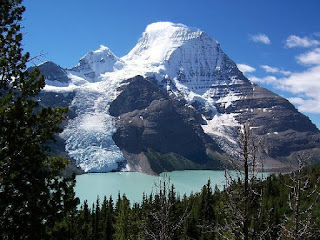 “That’s spider-goat territory.”
The artist in me wants to think of aesthetics. What will they look like? What’s the most horrible thing I can think of, that will give future generations of spider-goat-hunted North Americans nightmares for the rest of their days?

I know two things for certain: 1. They will have eight legs and those things that aren’t legs but look like them and come out of their faces with fangs on them, called pedipalps; whether or not the legs have hooves depends on where they live, mountains or cities. 2. They will have eight eyes, and they’ll all be goat eyes. 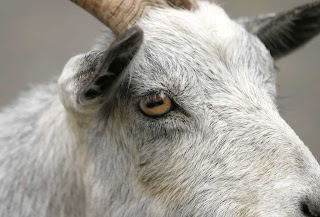 EIGHT OF THEM
I don’t want this to happen. But I know that it will.
I know that we’ve probably started the clock that counts down to our destruction by making something that will surpass us on the food chain.

Or, y’know, nothing will happen. Everything will work out fine. We’ll have the silk, and herds of happy, friendly, two-eyed, four-legged, goat-sized goats who want nothing more than to eat grass and tin cans and carrots and bump heads occasionally.

I doubt it though. And when the end comes… don’t say I didn’t warn you.

2 Responses to Engineering our own destruction: Spider-Goats