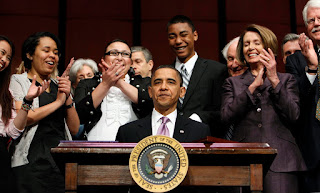 DARKE — After over 600 years of unjustly punishing the gullible, The United States Congress has finally enacted legislation to protect those who are taken advantage of on April 1, more commonly known by the insulting monicker “April Fools’ Day”.

Section 04.01.2010 of the controversial Health Care and Education Reconciliation Act that President Barack Obama signed into law on March 30 stated that Congress found the usually harmless shenanigans, hoaxes, pranks and practical jokes enacted by friends, family, enemies, or complete strangers annually on April 1 to be “unconstitutional and prejudicial against otherwise rightfully trusting citizens of these United States.” (Rep. Jonathan Buck, D – MA.) Therefore, April 1 will now be removed from every calendar in production within the United States, jumping straight to April 2. What used to be April 1 will now be referred to as “Noday”, and is now a National Holiday.

“I can’t believe they slipped that one by us,” said Rep. John Boehner, House Minority Leader in the 111th Congress.

The earliest known reference to April 1 being used to play tricks on others is in Geoffrey Chaucer’s “Canterbury Tales”, which was published in 1392. In the story “The Nun’s Priest’s Tale”, a vain rooster named Chauntecler is tricked by a fox on “March 32”, which is April 1.

Other examples of Historical Aprilfirstian Tomfoolery include an incident in 1539, when a Flemish poet named Eduard de Dene wrote about a nobleman who sent his servant back and forth on absurd errands on April 1st, supposedly to help prepare for a wedding feast. Another, which first occurred in 1698, consisted of several British citizens being tricked into visiting the menagerie at the Tower of London to “see the lions washed”. That has since become a tradition event, tricking the uninformed, and occasionally, people will even give away tickets to the “Annual Ceremony”.

Other famous tricks include a 1998 article in the monthly newsletter New Mexicans for Science and Reason, claiming that the Alabama Legislature had voted to change the mathematical constant “pi”, which starts out with 3.14 and continues on into infinity, to the “Biblical value of 3”; or, in 1957, the British Broadcasting Corporation ran a hoax in 1957 showing Italians harvesting spaghetti from trees. They received a large number of phone calls after the program ran, with people asking about how they could cultivate their own pasta-producing plants.

While this new law is only in effect within the boundaries of the United States of America, tourists from this great nation are not protected from these heinous acts perpetrated while on foreign soil, so Congress suggests vacationing within the country, lest U.S. citizens be accosted by tasteless pranks.

Also, in a minor footnote to the bill, the word “gullible” has been removed from all copies of Webster’s Dictionary sold in the United States of America, marking the first time in history that the U.S. Government has outlawed a word.

Tweet
This entry was posted in Uncategorized and tagged J/K guyz. Bookmark the permalink.