I love it when old people play video games 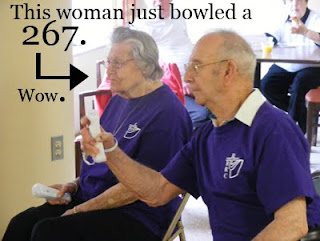 I just spent an hour watching 12 people over the age of 70 compete in a Wii Bowling Tournament at our local retirement community, and I think I love that idea more than anything I’ve run into in the last, say, 15 minutes.

This started in 2009. Somebody donated a Wii to the Brethren Retirement Community here in Greenville, which comes with a Wii Sports disc. On that disc is Wii Bowling, and these septua- to nonagenarians (70-90 year olds, as their oldest player is 92) have really gotten into it.

I think what I like about this the most is that Nintendo has done something really extraordinary. For the last 30 or so years, technology has been in this realm where if you’re past a certain age, it is more than likely beyond your comprehension. My parents still get calls from my grandparents about which remote goes to which machine. And here, Nintendo has created a system that is so advanced, and yet so simple, that someone who was born in 1918 can utilize it in a social setting. That’s amazing. That’s frikkin’ magical, man. I thought that my parents playing Mario Kart on the N64 was as good as it was going to get, but I have never been so glad to be wrong.

This tournament was just a local one, with 5 teams. In the fall, the League is expanding to include the entire Miami Valley, which is 17 counties. Every retirement community that wishes can get involved, and some have more than one team. We’ll just round that out to an even 20 teams, possibly more or less.

Each of those 20-ish teams is filled with people who witnessed the Great Depression, and are using a Japanese machine to get together and have a bowling tournament on a flat screen TV the size of a picture window.

Tweet
This entry was posted in Uncategorized and tagged Tony\'s Rant \'n\' Rave. Bookmark the permalink.