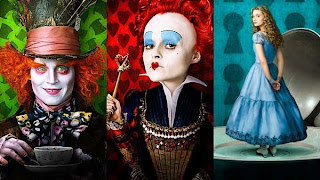 And we start using the new scale with a good example of more “Meh” than “Wow”.

There was “wow” with this movie, don’t get me wrong. The collection of actors, the production quality, the narrative (which gets us from points “A” to “B” very well) were all excellent, which is what saves this from being a 5 or lower.

All of the actors did a great job, which can be difficult when you’re dealing with 97.23% computer generated beautifulness. This is a textbook case of actors being professional and still looking believable on green screen, which is admirable. This place is a who’s-who of British actors, most of which I had to look up before it clicked that I knew who they were.

This film is glorious and creepy and gorgeous to watch. I saw it on IMAX in 3D, and I can’t imagine watching it anywhere else. It would suffer without those bits, which means it will probably suffer quite a bit critically, if not financially (this will make money by the barge full).

There are parts in this movie that were completely unnecessary. For example, the Mad Hatter: it’s like the people involved forced him into as many places as possible so they could have as much Depp-ness in the film as they could conceivably allow. I have no doubt in my mind that that is what happened: when you get the cash cow that is Johnny Depp, you use him as much as possible. Plus, it’s a Tim Burton film; this was bound to happen.

Helena Bonham Carter as the Red Queen did a good job, but there’s only so many times someone can yell “Off with their head” before you get really tired of it. Crispin Glover as the Knave of Hearts wasn’t really given a chance to shine, he was just sort of there.

Also, *POSSIBLE SPOILERS* the entire last 10 minutes of the film were positively ridiculous. And not in the same way as the rest of it is, with Cheshire cats and Bandersnatches and Jabberwockys, but with *shudder* “futterwacken”, which is a short Michael Jackson-ish dance that the Hatter does towards the end that nearly made me throw my hands to the heavens and yell “What the crap”, had I not been frozen to my seat in stunned silence. Also, when Alice returns from Wonderland, she basically tells everyone at a party that they can go jump off a cliff, though she does it very politely. Then SHE GETS AWAY WITH IT, and becomes one of her dad’s friend’s business partners. This is Victorian England. She would have been smacked around, force fed “medicine” and bed rest (and by that I mean booze and been locked in a room), and wouldn’t have been let out again until she learned how to behave herself. Also, she does a little futterwacken herself, which looked positively ridiculous and had even more WTF than the Hatter one, because she’s in the real world instead of Wonderland. *END SPOILERS*

This was not a bad movie. What it was was filled with stuff that was completely unnecessary. If you can, see it in IMAX, or at least 3D. It’s worth that if you like pretty things. If you have kids, they’ll love it. If you like Burton-Depp films, this isn’t as good as Edward Scissorhands or Corpse Bride, but it was still alright.

IN REVIEW: Better than a “meh” film, but full of baggage that drags it down. Very pretty, lots of talented people, will make crap-tons of money. Enjoyable, but still has moments when you go slack-jawed and wonder why they did that.

Tweet
This entry was posted in Uncategorized and tagged Movie Monday. Bookmark the permalink.