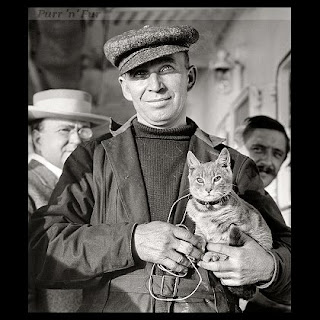 This is kind of a repeat, but I love this story.

Walter Wellman, who I featured in Obscure Heroes of History 1, was an adventurer who specialized in airship travel. He failed a lot, but he kept trying, which I dig about him. One of his airships was the patriotically named “The America”, which he tried to use to cross the Atlantic which no one had done before. He failed again, but that’s not the point.

The America was the first of its kind to feature radio equipment. It was therefore the first to send an air-to-earth radio message. Would you like to know what it was? You’ll have to wait for a little more exposition.

Kiddo was a cat that belonged to a photographer on the America. I guess he didn’t like the idea of leaving the little feline behind, so he brought Kiddo along… who immediately made a nuisance of himself, hollering and yowling as only an angry, claustrophobic cat can, bugging the crap out of everyone.

The first message they sent was to a secretary back on land, and was about Kiddo:

Tweet
This entry was posted in Uncategorized and tagged Heroes of History. Bookmark the permalink.